Sitia is a lively town with approximately 11.000 inhabitants. The district is famous for its con­siderable olive oil production and for the excellent quality of its olive oil and wines. There are numerous local festivals in traditional Cretan style held in villages throughout the summer, which are well worth attending, as well as cultural events in the town.

Sitia is a town that accepts the past and is longing for the modern. There you can sense the hidden magic and peacefulness mixed with life and vividness.

Those who choose to visit Sitia should not miss doing some things.

- The Archaeological Museum of Sitia one of the most important provincial museums in Greece . There are exhibits of the whole Sitia area from a time of 4000 years, from the Neolithic Era (3500 B.C.) to the Byzantine period (500 A.D.). These exhibits of great value i.e. the unique statuette of the Minoan time made of gold and ivory found in Palekastro and many others.

- Do not forget to admire the view over Sitia Bay from the Venetian castle of Kazarma especially in the summer nights. There is also a specially fit out place for artistic events as part of "Kornarion", the festival - tribute to the great poet of the masterpiece "Erotokritos", Vintsenzos Kornaros, who comes from the Sitia area. He refers to this area at the end of his poem where he describes his place of origin.

- Taste the fresh fruit at the open market, all products of the Sitian land.

- Feel the sea breeze while enjoying the meal at the picturesque taverns at the port. 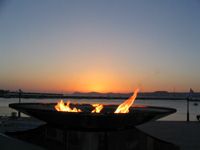 - Discover the traditional food in a restaurant either on the terrace of an old estate or in a neighbourhood of the town.

- Discover your own Sitia, choose your own routes and follow the roads that will excite you. Get to know the simplicity and kindness of the people in the town at the south-eastern end of Europe.

The whole district abounds in archaeological and historical interest from the Minoan period onwards. Within easy reach of Sitia, there are many places to be visited, such as the Toplou Monastery, the fourth in size Minoan Palace of Kato Zakros, and other important archaeological sites at Palekastro, Itanos, Pressos and many more. There are two fine museums in Sitia, archaeological and folklore, with many fascinating exhibits. 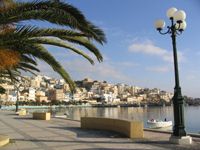 For the walker, the hills are covered with aromatic plants and hundreds of beautiful flowers, especially in the springtime.

East Crete is ideal for those who enjoy walking, be it a short walk or a good hike! There are some routes in and around Sitia and, in the Palekastro area, 5 routes of varying lengths and difficulty have been specifically mapped out. One of the walks' is through the gorge of Kato Zakros, at the end of which, there is a section marked out for rock climbing.

Walking along sections of the E4 European mountaineering path (which runs along the whole of Crete), you will discover some of the most beautiful, wild terrain and meet equally memo­rable people. Flower lovers will be amazed by the beautiful wild flowers and herbs which cover the countryside during April and May. Divers will also find the area to be of great interest.

A small settlement, near the sea, where the important post Minoan cemetery was excavated with 300 tombs filled with about 1800 objects and vessels, many of which are exhibited at the archaeological museum of Sitia.

A green village with a fountain near a beautiful water stream. lt is a place of great archaeological interest, as a Minoan and Geometric cemetery have been excavated, as well as a large Minoan villa. Among the findings there is a wheel, several stone tools and other objects. Here, the caves "Megalo Katofugi" and "Mikro Katofugi" are located, both of which were inhabited in antiquity. The region of Aghios Georgios also includes the picturesque settlement of Pano Piskopi. Right after the village of Aghios Georgios, on the right, there are the small villages of Sukia and Sklavous and down the road the is the settlement of Vori and Lithines.

A beautiful village, where some old noble houses are preserved. In the site of Platoskinos a post-Minoan tomb has been excavated, with a corridor and a large circular chamber, while in the site of Riza a large and complex agricultural villa of the Minoan period has been found, with 12 rooms and a "Cretan Megaron" (a large characteristic chamber, a kind of living room). In the community of "Achladia" the deserted old settlement of Kumourgiotis is located, next to a green stream. After Achladia you will reach the small settlements of Paraspori and Skordilos, where a beautiful Turkish fountain is located.

It is first recorded as part of the Sitia province in I 577 by Fr. Barozzi. The Venetian church of Panagia (Virgin Mary) is located there. In the site of Trupitos, a guard tower of the Hellenistic period was found in 1978. A 2 meters high stone wall is still preserved.

It is first recorded as part of the Sitia province in I 577 by Fr. Barozzi. Minoan tombs have been excavated in the region.

A small traditional settlement built around a green stream in a region where a significant Minoan residence has been found, along with numerous valuable findings that are exhibited at the Archaeological Museum of Heraklion. The fountain of Zou is famous for its excellent quality drinking water. In the same region, there are the small settlements of Arniko, Pano and Kato Drus, Zaharino, Muloi, Sfakakia and Stavromenos.

A traditional mountainous settlement, where the top Prinias with a Minoan shrine is located. The excavations around the shrine revealed valuable findings. The community of Katsidoni also included the small settlement of Santali.

Krya consists of two small settlements, Pano and Kato Krya. A cemetery of the pre-Minoan and Geometric period has been found in the area. At the top of the hill of Aghios Georgios there are the ruins of the Venetian castle Monte Forte or Apo Kastelli, built during the 13th -14th century. After Krya, to the left of the road, there is the small settlement Dafne with a small picturesque square, a large platan tree and a water fountain.

A settlement bearing a pre-Hellenic name, where important Minoan remains and findings have been discovered. lt is a very beautiful village that still preserves a lot of traditional elements. In the village there are the Byzantine churches of Aghios Georgios and Christos Qesus Christ).

A small village near the green stream of the river Panteli, where Minoan tombs and antiquities have been found. The old olive press of the village has been turned into a folklore-agricultural museum.

A settlement where the significant I 5th century church of Aghios Georgios is located, with part of its frescoes still preserved.

A settlement where important antiquities and findings have been revealed, including a bell-shaped proto-geometric crater with the representation of a hunter and a man on a horse and a golden mask. The small settlement of Kalavros is also in the region, located on an impressive landscape over the steep coast of the Cretan sea. Furthermore, the famous since antiquity wine from "liatiko" grape is produced here.

A picturesque fishing village with a small islet in the north (Aghios Nikolaos). In antiquity, the islet was united with the mainland through a channel that fonned two natural harbors. It was an important naval center of the Minoans, and the excavations have revealed many of its secrets. The architecture and the Minoan findings, such as the vessels of Mohlos, are considered as some of the most important findings of this period. Northwest from Mohlos there is another larger island, Psyra.

A traditional village with a magical view of the Cretan sea, where ancient installations have revealed important findings, mainly from the postMinoan period. In the site "Ghalana Harakia" the first Minoan domed tomb of Eastern Crete was found, with 60 burials and a large number of vessels and other objects. North from the village, next to the small church of Aghios Antonios, the ruins of a Venetian tower are preserved.

A village that took its name from the famous ancient city of Praissos, the capital of the Eteocretans. The ancient city was built over three hills- acropolis, next to the river Stomio and was inhabited since the Neolithic times. Near the ancient city of Praissos the new city of Praissos was built, the small village Vaveloi that in 1995 was renamed as Nea Praissos. In the position Skales or Helidonies, there is a cave where vessels and tools dating back to the Minoan period were found. In the position "ravdia tou Digeni" and "Kiona" an ancient quarry was found. A bit further, the settlement of Aghios Spuridonas is located, and a bit lower there is a green stream with a watermill (tou Fugeto o Mylos).

An asphalt road that starts 5km east from Sitia leads to Roussa Ekklesia. lt is a picturesque green village with many waters and a marvellous view of the gulf of Sitia. At the main square of the village with the large platan tree and the old church of Aghios Nikolaos, there is a beautiful fountain built by the Eparch of Sitia K Axelos in 1877. At the site of "Anoiksi" a shrine with many archaic findings was excavated and at the site of "Kastri" the ruins of a fortified city with towers have been found. The district of Roussa Ekklesia includes the deserted small settlements of Kruoneri, Xerolimni, Mitato, Vrusidi, Magkhasas and Honos, with excellent samples of old traditional Cretan architecture.

A small village in Katsidoni Community, Municipality of Sitia. The village, 13 km from Sitia, lies at an altitude of 350m. lt is called Sandali from the Turkish word for "seat''. Visitors today can enjoy the shade of the ancient plane trees that form a magical landscape, and relax with a refreshing draught of cold water from the spring at the end of the village.

A small settlement located in a beautiful landscape, where the cave Okso Latsidi is located. Near Sitanos there is the deserted settlement Zakanthos. East from Sitanos, on a fortified position with a complex of impressive rocks, the deserted settlement of Skalia is located. Skalia has a glorified history. lt was the "unconquered Castle" of Eastern Crete during the Turkish occupation. At the end, Skalia were also conquered by the Turkish army, after long battles and sieges. The church of Aghios Georgios is preserved, along with a small water fountain. The rocky landscape is quite imposing.

One of the larger settlements of the Sitia province, with historical traces from the proto-Minoan-geometric period (a domed tomb in the site of Droggara). Around the region of the settlement, near the sea, there is the deserted monastery of Panagia tis Faneromenis, built in the I 5th century. Another important monument of the region is the fortress of Liopetro, dating back to the Genoan period. Parts of the wall with the towers and several domed tanks are preserved. North from Skopi, in interesting coastal areas, the small settlements of Papadiokampos and Platani are located.

A settlement with an old church of Aghia Triada. In the region "Keratidi" a Minoan tomb has been excavated.

A traditional settlement built on a hill with a marvelous view to the sea. In the site of "Kastri" the ruins of a Minoan settlement has been found, along with valuable findings .

A settlement with a valuable folklore museum. In the region of Hamezi there is one of the most important archaeological remains of the Minoan civilization, the elliptical Minoan residence. The typology of the building, located on the top of the hill Souvloto Mouri, became the subject of an interesting scientific dialogue around the origins of the residence type and its function .

View "Sitia, The other face of Crete", guide

On the Eastern coasts of Crete the predominant Sun, too strong to be ignored will be revealed to you. The power of the sunlight magnifies the visitor's senses.