Visitors can admire the rock-cut copy of the Minoan stone matrix from Palaikastro, Sitia, which was used in the Minoan era and is thought to be the first analogue computer in human history.

The Archaeoastronomy Centre, operating on a permanent basis with daily tours, is housed by the town marina, in a booth owned by Sitia Municipality. Minas Tsikritsis, a scholar of Aegean scripts, established the centre in collaboration with the Municipality and the Holy Metropolis of Hierapytna and Sitia. Their aim was to create a centre of Minoan civilisation in Sitia, in order to showcase the value and culture of Minoan Crete, the cradle of Europe, and to provide visitors with the opportunity to observe, once again, that Ancient Greek civilisation is inextricably linked with every scientific field. The Palaikastro mechanism, thought to be the first computer in human history, is a rayed disc dating to the 15th century BC, divided into two semicircles with a cross in the centre. The original matrix with relief symbols, discovered at Palaikastro, Sitia, in 1898, is housed in the Heraklion Archaeological Museum. It depicts the cosmological model of the Minoans. The Minoan artefact predates the “Antikythera mechanism” by 1,400 years and is the first analogue computer, with three recognised functions to date:

Next to the copy of this Minoan computer is a modern interactive computer on which visitors can predict future eclipses by tracking the orbits of the Sun and Moon.

On display in the booth are also copies of “frying-pan” vessels from Hagia Photia, Sitia, dated to 2,700 BC, depicting planetary synodic cycles. They are thought to have been used as calendars and aids to predict the position of the Sun, Moon and planets, in order to plan seasonal activities. We are left speechless by the skills and knowledge of the people who made these accurate calendars, based on solar, lunar and planetary movements and periodicities.

The booth is also a centre of Aegean Scripts, the first writing systems of European civilisation, with examples of the first Cretan scripts: Cretan Hieroglyphic, the Phaistos Disc, Linear A, and the oldest deciphered script in Europe, Linear B. Over 500 word-symbols are presented here, representing months, occupations, deities, place-names, etc.

The booth, in the remotest corner of southern Greece, makes Sitia a unique tourist destination for everyone, particularly schoolchildren. It provides a history lesson to all, highlighting the roots of Cretan and Greek civilisation, and demonstrating the origins of technology: astronomy and mathematics were developed by the first Greek civilisation from the mid-15th century BC onwards. 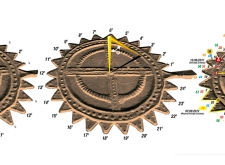 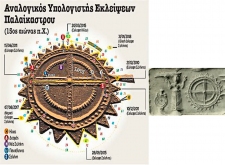 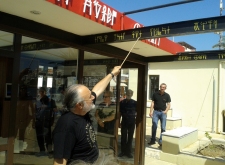 View "Sitia, The other face of Crete", guide

On the Eastern coasts of Crete the predominant Sun, too strong to be ignored will be revealed to you. The power of the sunlight magnifies the visitor's senses.